Onsens are a great way to unwind after a busy day on the slopes. However, they are a little bit different to anything you have used to at home!

What is an Onsen?

An Onsen is a Japanese thermal hot spring where the waters are said to have healing properties and after hitting the slopes what could be better for your tired muscles.

Some things to remember when visiting the Onsen:

Firstly, NO BATHING SUITS!
Yes, you read that right. Typically, Onsens are separated for men and women (however there are some communal options). Don’t worry, you are given a modesty towel (usually the size of a face cloth or hand towel).

Once you are in the Onsen, you will store your belongings in the locker room and have a shower before entering the bath – the Onsen is for soaking only (not washing).

There is no eating/drinking allowed in the Onsen or photography. Respect those around you by following the rules set out for the Onsen and be courteous to others.

In some of the smaller resorts, tattoos can still be considered offensive,  so if you have tattoos, try and cover these if you can or check with the operator whether it is okay for you to use the Onsen.

Remember, Onsens are a place for reflection, relaxation and contemplation so take advantage of the peace and quiet, help your aches and pains and enjoy your Onsen experience.

To book a beyond ordinary ski/board experience to Japan including flights, transfers, accommodation, lift passes and activities call a Mondo Travel Specialist on NZ Toll-Free: 0800 110 108. 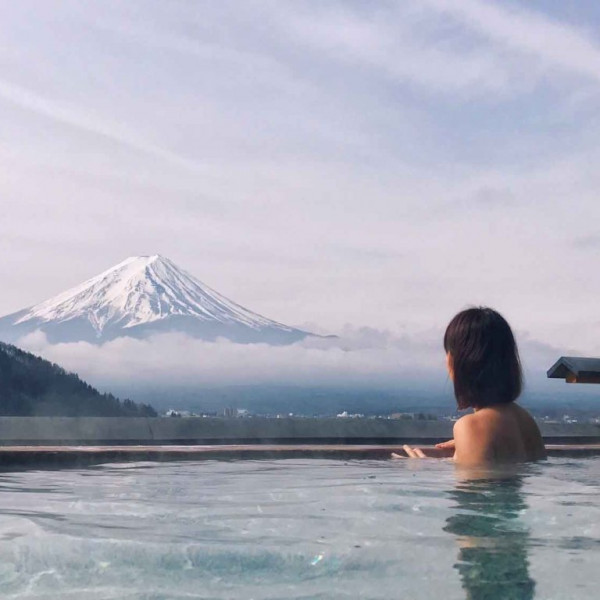 Air Chathams will start a weekly service from Auckland to Norfolk Island beginning Friday 6 September. Introductory fares expected to start at $199 (exclusive of taxes) will be available in limited numbers for scheduled flights.

Tickets will go on sale mid to late April. Promotion will begin in May and potential passengers are advised to look out for special fares for the service’s launch in September.

The new route will be serviced by the Convair 580 aircraft which is configured for 50 passengers with an estimated flight time of just over two hours. The Friday service will depart Auckland at 9am and return same day from Norfolk Island.

Mondo will be offering package holidays to Norfolk Island shortly.

I step off the bus into snow. Distant barking reverberates from somewhere amongst dark green pines. I'm not keen on dogs. In no hurry to meet them, I keep to the back of the group. I don't want to get jumped up on. Or worse, licked…

We stop before reaching the dogs as according to Urho, the head musher, we wouldn't hear him amongst them. He explains the hand signals the guide will use. Left hand up - stop, left hand forward waving - slow down, and left arm bent, hand pumping up and down - let's go. Most importantly, he tells us how to work the brake. Apparently the dogs are raring to go.

We reach them. I'm safe. The huskies are harnessed to sleds and uninterested in slobbering on me. The cacophony of high-pitched, low-pitched, incessant barking, requires ear muffs. It's louder than a rock concert.

I was expecting long-haired, white dogs. Instead, these Alaskan huskies are lean, mostly their fur is a mixture of black and white, brown and white, or grey and white. Their short, thick coat apparently traps the air and insulates them against the cold. And it's cold - around -15°C. Fifty-five of the 150 dogs kept at Erasetti Husky Dog farm, about 20 minutes drive from Saariselkä, are harnessed, the sleds tied to trees or they'd surely be gone. Only 105 of the dogs actually work, others are puppies, or older animals who the young learn from. However, I'm sure 150 are barking.

Deciding to be a passenger – if they're raring to go I don't fancy being in charge – I have Nacho, our tour guide, as my sled driver. He's done this before so I feel safe. I settle onto the reindeer hide-covered seat, inches above the ground. The wooden sled reminds me of an oversized cradle. The frame rails bound together with rope are about an inch in diameter. It doesn't look particularly sturdy.

A guide on a snowmobile takes off and the first sled is untied. The huskies hurtle. The second sled goes, travels around ten metres then our rope is loosened. It whirls free as the five dogs bound forward, barking intensifying. We're off.

The sled swooshes smoothly despite the huskies tumbling and jumping at each other as they run. Snow drifts up from the sled ahead like water spraying from under tyres as we ride between deep green, snow sprinkled, pines which cast long shadows. Early morning sunlight peeks between trees and catches on snow crystals. They glint like tiny scattered diamonds.

The snowmobiler raises her hand. We come to a stop at a great expanse of glaring, pristine white. Possibly a frozen lake. Checking on each sled party, she reaches Nacho and I. Her eyelashes are mascara-ed with ice. I guess mine are too.

The black husky running at the rear of our pack, where the strongest dogs are positioned, is apparently being lazy. I've no idea how the guide knew, but he's unhooked and swapped with another from the sled ahead. The other huskies wait patiently, their panting breath resembling puffs of faint smoke. Some lie on the snow, some bury their muzzles in and eat it. I wipe my dripping nose and pull my scarf further up my face.

Soon, we're off again. Three pairs of woollen socks and heavy, oversized rubber boots aren't keeping my toes warm. I wriggle them, along with my woollen gloved and mittened, frozen fingers. With my legs bent, my four layers of clothing - including padded overalls - are tight around my knees making them cold too. I straighten out, loose clothing apparently traps air. My top half is fine. But my nose and cheeks, the only part of me exposed to the air … I've never put a block of ice on my face, but I'm sure I know how it would feel. I huff. My breath warms my face but dampens my purple scarf, becoming white frost on it. My sunglasses mist up. I'm blind. I take them off.

The dogs quieten down as we swoosh through the cool, shady pine forest along the narrow snow track, its whiteness broken by a splash of yellow or brown. The huskies have just had their breakfast …

Apart from our sledding party, there's not another living thing around. It would be silent but for the chains between the dogs jingling, like tiny bells. Occasionally, Nacho murmurs a few commands to the pack which sound foreign. Maybe a 'gee' for a right turn, or 'haw' for left?

Close to the end of the roughly 10 kilometre ride, I've had enough. My face is so cold it's painful. My shoulders are hunched, my chin down, trying to stay warm. The dogs seem unbothered by the temperature. Ice, like frost on grass, decorates the fur around their muzzles.

Several people decide one sled ride is enough and head for an open fire and warm berry juice inside a log hut. I waver … When else will I ever do this again though?

Standing on rubber nailed to wooden runners at the rear of the sled, I grip the handrail and pray to anyone watching over to help me. The rope unwinds from the tree. There are no reins, no leads. The dogs know to follow the snowmobile. Driving is easy. But I'm ready to stand on the brake, a metal pronged bar that digs into the snow, if things get out of control.

However, I'm too busy enjoying the Christmas card scenery, when our snowmobiler leader halts at the iced-over lake again. My dogs are almost in the sled ahead before I remember to stand on the brake between my feet. I'm more onto it next time.

The two rear dogs run as if they're joined at the hip not leaving each other's side except when the right one tumbles. He's dragged for seconds on the snow before scampering to his feet and carrying on. The pack is faster than those pulling the sled ahead. I continually apply the brake and feel bad slowing them uphill. The huskies look back at me as if to say 'Why? Let us go.' If I do, we're sure to have a nose to tail.

On other inclines they slow. Intense, pale blue eyes look at me again imploring a hand. My passenger, Laurie, is heavily built and over 6 foot. The dogs have their work cut out. I take one foot off the runner and scoot. I'm not sure I'm any help but it warms me, my hands are freezing. It's hard work scootering uphill in my many layers and with a cold. I puff. My nose drips, heart hammers. When the dogs aren't looking I ride. Then I feel bad. I scoot a little more.

When we reach a downhill slope I rejoice. We're whizzing … with my foot poised, ready to brake.

On our return, after nearly two hours outside, I'm ready for the warm log cabin. But not before gingerly patting one of my pack on the back. For dogs, these huskies are okay.

The writer travelled courtesy of BenTours and Mondo Travel. 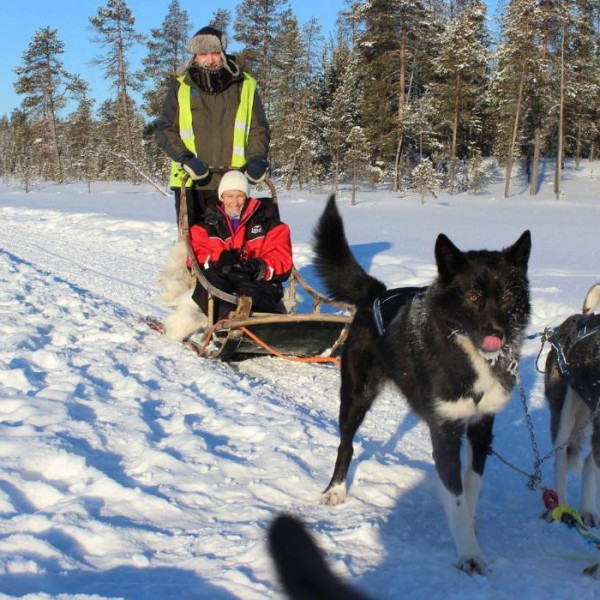